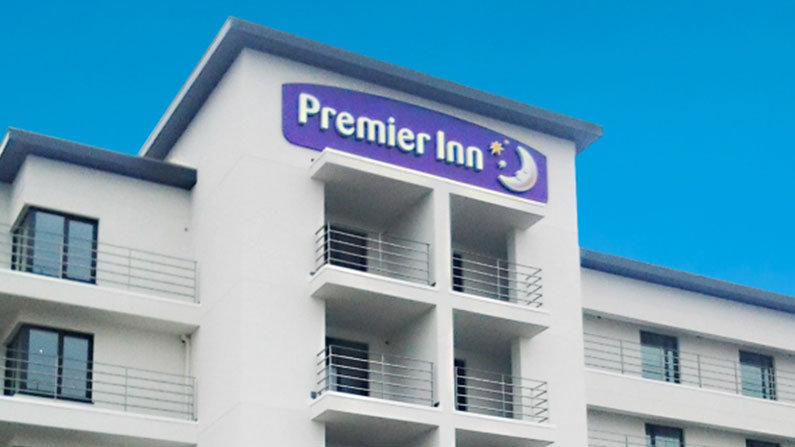 With amber and yellow Met Office alerts still fresh in people’s minds, ALD turned to Euroform’s Rendaboard when they were looking for a robust render carrier panel for their Southend-on-Sea Premier Inn project. What’s more, Rendaboard was also compatible with their choice of render: Jub’s Nanoxil, a thin-coat, self-cleaning silicone render.

Southend-on-Sea is currently in the midst of a dramatic regeneration program. Unsurprisingly, with the location being a favourite seaside holiday destination, particularly for families living in the South West of the country, tourism is a core element of that regeneration. Equally unsurprisingly, Premier Inn, the UK’s largest hotel brand, with over 50,000 rooms across the UK, are keen to play their part. Premier Inn, with two hotels already well-established in the area, decided that a third was a perfectly viable commercial proposition.

Constructed on a derelict site on Eastern Esplanade, that once housed the gasworks, this 81-bedroom hotel is a four- and five-storey structure and also features a 190-cover Brewer’s Fayre restaurant and 69-space car parking facility.

Main contractor, Carter Lauren, no stranger to Premier Inn projects, having worked with Premier Inn owners, Whitbread, for many years, engaged the services of dry-lining and external façade specialists, the ALD Group.

The ALD group, two-time INCA-award winners, with experience spanning four decades, were faced with the challenge of deciding which render to use and which render carrier panel. The location was a significant driver in this respect.

Situated on the promenade, just a stone’s throw from the water, where the Thames opens into the North Sea, this is an exposed location, prey to the less than generous, and occasionally harsh, British weather. Rain and strong winds can prove disastrous for a building’s façade if an insufficiently robust render is used. In a very short time, the render can become cracked, worn and stained.

Premier Inn’s core proposition is to offer budget accommodation that is fresh, clean and comfortable. Their slogan is ‘Get a Great Night’s Sleep or Get Your Money Back’. A guest is hardly likely to have a good night’s sleep in a grubby hotel, so owners Whitbread have a great deal invested in ensuring this promise is fully delivered. And, as first impressions count, a less than attractive exterior is a positive liability for the business.

With this in mind, ALD selected JUB’s Nanoxil. Nanoxil is a thin-coat. high-quality, self-cleaning silicone render. Due to a high content of silicone binders, dust, soot and dirt struggle to adhere to Nanoxil. Consequently, in areas of high precipitation, a self-cleaning effect is created. This enables long-term resistance to the likes of algae and mould.

With the render selected, the next stage was to select an appropriate direct render base board.

Given the coastal location, a robust board was called for. This requirement was made even more pressing by the fact that this stage of the construction was taking place during the winter months, shortly after the British tabloids had been full of stories about the ‘weather bomb’, a massive depression from the Atlantic that had subjected the remote St Kilda islands to 144mph winds and had generated 80mph winds elsewhere the UK.

Rendaboard is a fully external board, Category ‘A’ rated in accordance with EN 12467 and offers excellent dimensional stability and impact resistance. What’s more, given the recent ‘weather bomb’, it has been tested for wind loading, with very successful outcomes. What’s more, Rendaboard had also been tested and approved for compatibility for use with JUB’s Nanoxil, the very coating ALD were keen to use.

In fact, Rendaboard has been tested and approved for compatibility with a range of coatings, including products by Weber, Knauf, Dryvit, K-Rend and Wetherby.

John Taylor, Euroform’s Technical Manager, said, “We appreciate that no single construction material or product works in isolation. We take a ‘system solution’ approach to every project we’re involved in. For us, ensuring compatibility with as wide a range of coatings as possible enables us to present our clients with a value-added solution. Not only does our board work in our client’s application, it also works with their render of choice.”

Richard said, “Working in close collaboration with the architect, it was agreed that the synergy between the Jub render and Euroform Rendaboard offered the perfect solution for this project. The ease of use and quality of service received from Euroform will ensure our commitment to recommend the use of Rendaboard on future projects.”