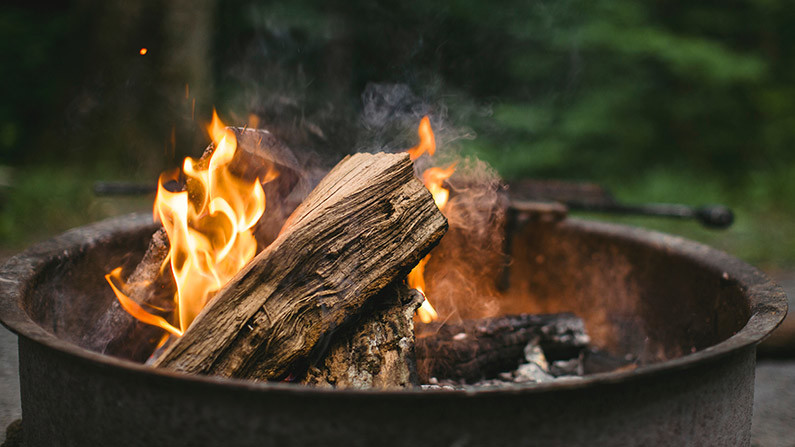 No Fire without Smoke

We tend to think of burning as a fairly simple physical process. Even small children understand it. If you set fire to a piece of wood, it burns. Simple. But burning is really a chemical process and, strictly speaking, the solid wood itself doesn’t burn. What actually happens is a little more complicated. When heated by a naked flame or friction, the molecules in the wood begin to vibrate and move apart, becoming a volatile gas: smoke. This gas combines with the oxygen in the atmosphere; it is this combining of molecules, this chemical reaction that produces energy as a side-effect in the form of heat and light: a flame. So, the solid wood isn’t burning at all, the gasses released by the heating of the wood form just half of a molecular relationship that creates fire.

Actually, it’s even more complicated than that. If I was to tell you that water is actually burnt hydrogen, you’ll have some idea of just how complex it is. And if burning is such a deceptively complicated process, the means by which we defy that process must be equally, if not more, complicated.

Which brings us to fire resistant boards. The idea that these crucial construction components can be effortlessly picked from the shelves of a local builders’ merchant or dropped into a virtual shopping trolley in some online equivalent, is a misguided and, quite possibly, dangerous one.

There’s No Such Thing as a Fire-Resistant Board

The relative fire resistance of a board is entirely dependent upon its application and can only be measured by rigorous testing not simply of the board itself but of the board as part of a system designed for that particular application.

It is the words ‘rigorous’ and ‘testing’ which are key here. In fact, whenever the word ‘testing’ is not accompanied by the word ‘rigorous’, alarm bells should ring, particularly when it comes to the subject of fire resistance.

A Brief Overview of Fire Testing

As you’d imagine, fire testing isn’t simply a case of measuring how long it takes for a building board to fail. Anyone with a large back garden, a stopwatch and a complete disregard for their neighbours could do that.

There are three core criteria for fire testing: integrity, insulation and load bearing. The ‘integrity’ of a building board is essentially a board’s ability to remain physically intact. When flames have passed through the construction and have ignited a cotton pad on the non-fire side of the board, the board is said to have ceased to remain intact. In a sense, material testing laboratories don’t measure the success of products so much as how long it takes them to fail. The ‘insulation’ criteria is measured using thermocouples that monitor the amount of heat passing through the structure being tested. Failure occurs when the average temperature has exceeded a predefined maximum or, indeed, if a single thermocouple records an excessive temperature. The ‘load bearing’ criteria measures a structure’s ability to maintain a given imposed load under fire-exposure conditions. More about EN testing, shortly.

How to Test for Rigorous Testing. Rigorously.

Ensuring the board you’re about to purchase or specify has been “rigorously tested” for your particular application can be extremely complicated not to mention labour-intensive, involving wide-ranging online research and hours spent poring over technical datasheets. And whilst all of that is, to a certain extent, unavoidable, a lot of the pressure can be eased by simply talking to your building board supplier, not only to extract information but also to assess their attitude to testing.

Fire testing cannot be approached as a box-ticking exercise. A responsible manufacturer and/or supplier of building boards will have a fire-testing ethos. Their testing will be an ongoing, permanent process driven by a continuous improvement mindset. They won’t simply send products for testing, they will be actively involved in that testing. They won’t ‘use’ a material testing laboratory, they will have a long-term and collaborative relationship with a material testing laboratory whilst simultaneously respecting said laboratory’s expertise, qualifications and, of course, independence.

It is also worth enquiring as to whether your building board supplier has fully embraced EN testing.

The proliferation of continental trade necessitated the creation of a European Norm (EN) to guarantee consistency of quality irrespective of borders. A side-effect has been to create a standard that is, in most cases, more onerous. The fact that an EN standard has to satisfy the current standards of many countries and cannot be reduced to the demands of just DIN or BS, for example, means it is almost inevitably going to be more ambitious in its scope.

This is why EN testing generally demands a more stringent increase in furnace temperatures, dictates that thermocouples be placed in more challenging locations on the specimen material and can, for example, require cover strips to be applied over studs in thin-gauge metal-framed partitions to protect from additional temperatures.